If you love family board game nights and get excited by escape rooms, do we have news for you! Masterminds Escape Room and Game Library opened in October and has been entertaining Ashland citizens ever since.

Masterminds Escape Room and Game Library is the first escape room experience in Ashland County, and the only Game Library and Escape Room combination in the state of Ohio. We strive to grow minds and social interactions between family, friends, and first-time gamers of all ages. In a time where social media has changed the layout of our world, we enjoy setting the electronics aside and having quality time with friends and family.

I sat down with Ben Garrett, owner of Masterminds Escape Room and Game Library, to ask him a few questions.

“We are, technically, two business models. So, the first is our game library up front here and we have about three hundred games. That really drives around the concept and the business model of some of the other game libraries that are usually found in larger cities like Cleveland or Columbus. We felt this idea could work on a smaller scale specifically because we have the other half of our business, which is the escape room. The escape rooms facilitate most of our income, which allows us to run the game room. Masterminds is really all about being a place that you can come and hang out, enjoy yourself, enjoy a night out with family or friends. We actually have a lot of people who just show up by themselves to play games with other people. If our workers aren’t busy, we’ll sit down and play with them or they’ll end up in another group, which is really cool to see and it works out quite well.” 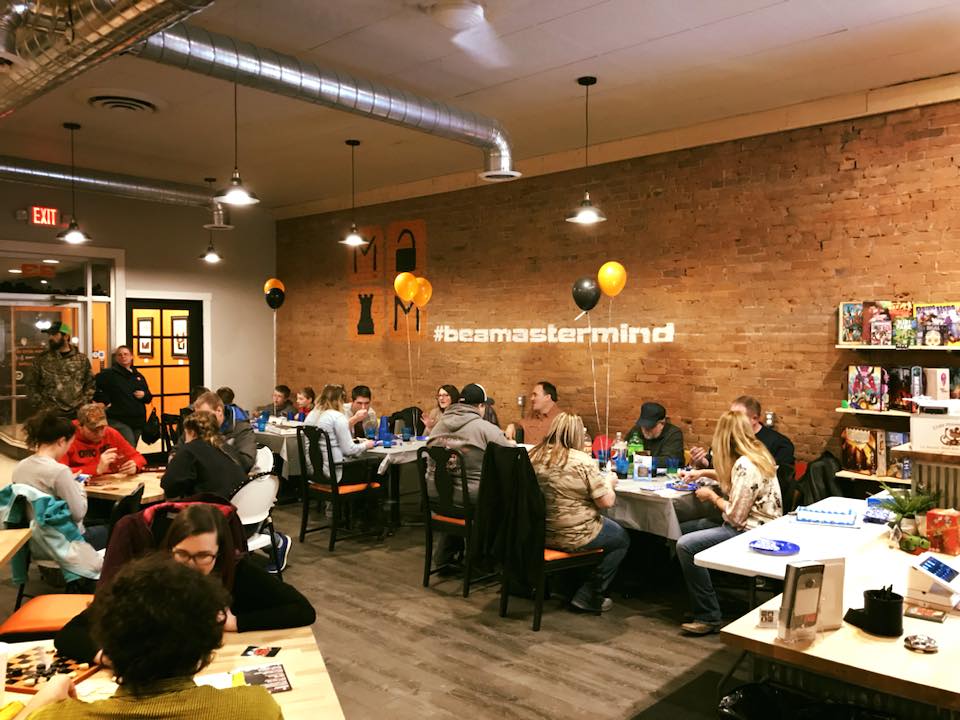 How does an escape room work?

Masterminds has two different escape rooms: Time Traveler and The Heist. According to their website, Escape Rooms offer an escape from reality, and allow your mind to forget the worries in life and focus on various puzzles and challenges. Through these challenges, teamwork, communication, logical reasoning, and critical thinking are developed.

Ben says, “The escape room is basically a real-life immersion experience. I equate it to a game, but instead of a screen or virtual reality, you actually get to touch and interact with objects in the room. Every experience and outcome is different, depending on how a group interacts with a room. There’s sound and lighting and smoke and bubbles and a full scale production in the room, to actually make you feel like you’re in this room. And you have 60 minutes to complete an objective.”

“Our escape rooms work well for corporate events or teambuilding. We had a few Christmas parties scheduled, for workers to come play games up front and then participate in the escape rooms in the back as well.”

Why should people be excited about this?

“I think Masterminds offers that entertainment option. We’re very excited to be downtown. Especially with Uniontown Brewery, you can go have a drink with friends and then spend some time here. The board game side of it drives from having family game nights once or twice a week. We carried that over into an atmosphere that makes it accessible to other people. 90% of the people that come in here say ‘I didn’t know this many board games existed’. There are tens of thousands of games and we just have a small percentage of some of the better ones. It’s not just about Monopoly and Scrabble and Mousetrap, it’s so much more than that. So creating that culture, and also with the escape rooms, it’s a new trend of entertainment and we’re excited to bring it to Ashland. And once you do ours, you’ll want to do the escape rooms in Wooster and Mansfield. You just immediately fall in love with it and you’ll want to do more.”

Why is Masterminds beneficial to Ashland?

“We’re one of those businesses that can help draw people from out of town. Personally myself, I’ve driven to Cleveland and Cincinnati and Columbus to go to these board game libraries. We’ve had people from Tennessee who stopped in on their way home. They saw our website and wanted to come. And then they visited other downtown shops while they were here. So just to be able to draw people from out of town, for entertainment and for corporate events is amazing. You get some of the older people saying it’s just a kids’ place, but it’s really not. The escape room especially works for all ages. I could find a board game for you, based on what you’ve played before and what you like.” 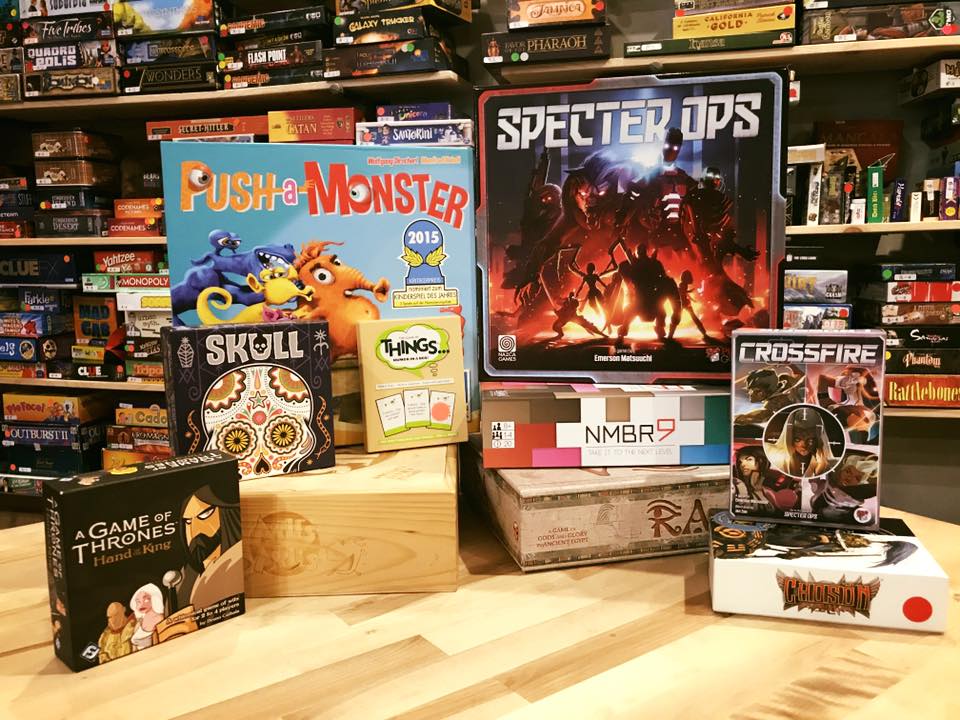 Any events in the future?

“We’re going to start doing mixer nights every other Tuesday of the month. It’s not a single’s night or anything like that- it’s just for people who love games to come out and meet other people who love games. We also do Hearthstone, which is a deck building game through a mobile app. Normally people play each other all across the world but when you come here, you play each other in the room. You can have real-life conversations over the game you just played. Family nights and trivia nights are also going to be happening very soon.” 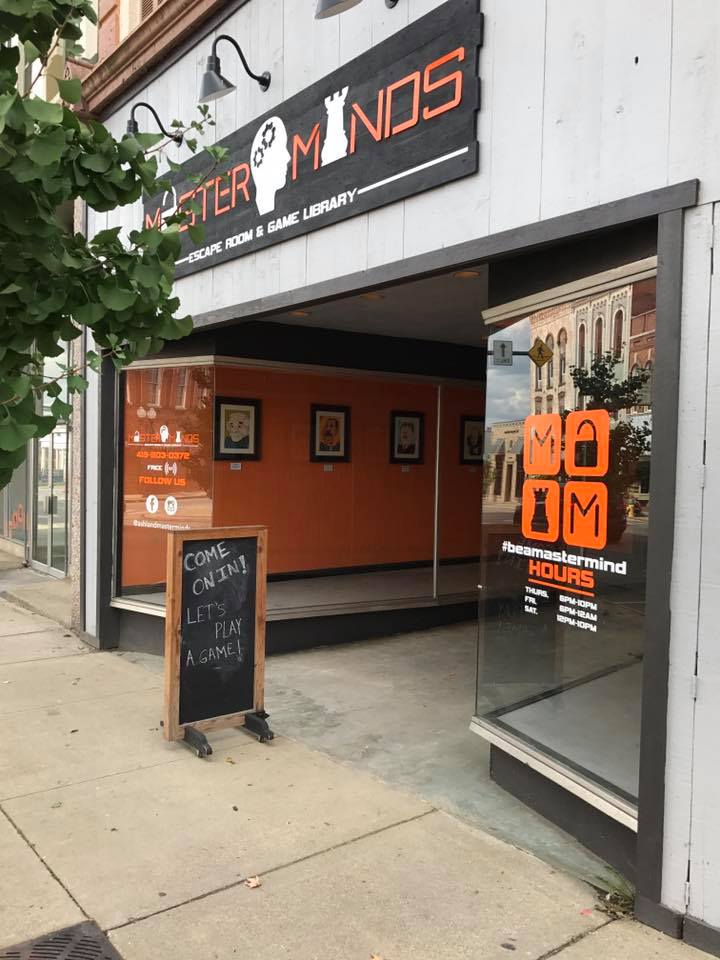 Escape rooms can be reserved in advance by calling 419-903-0372, through their website, or via the Facebook page (https://www.facebook.com/ashlandmasterminds/).